This is a rather tasty winter warmer soup.  You can eat it by the bowl full if you’re an ‘eat loadser’. It’s also a handy snack if you’re doing the five two diet because it happens to be very low in calories.

Ready in about 25 minutes (including preparation time)

Salt and pepper to taste

Chop carrots and leeks roughly, and finely chop chilli and ginger and crush garlic and place in saucepan.

Cover with three quarters of a pint of water. Add sweetcorn. Add stock cube and seasoning and Marmite if using. Heat and then simmer till cooked.

Top Tip. This tastes even better the day after (keep in fridge overnight). It’s less than 400 calories a pan (serves two) so makes a handy and quite filling lunch or part lunch if you are on a ‘fast day’ on the five two diet. 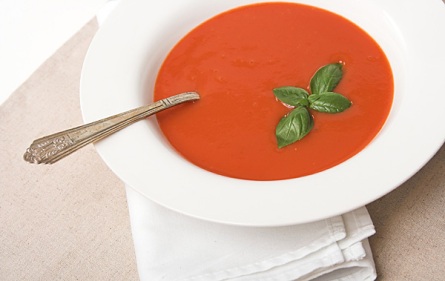 According to scientists, when it comes to ‘eating loads’ people use their eyes, not their stomachs, to determine how much that is.

In one such study scientists took fifty-four volunteers and sat them down to eat a bowl of soup. Whilst half of the participants ate from ‘normal’ soup bowls, the other half unknowingly ate from bowls that were rigged in such a way that they could be slowly re-filled without the diner realising it. These folks ate, on average, a staggering 73% more soup and, more interestingly, had no idea that they’d done so. The scientists concluded that when it comes to figuring out how much we’ve eaten we rely on what our eyes are telling us.

Firstly, from here on, when it comes to food pay attention to your stomach. If you feel full, particularly if you’re no longer enjoying the meal – stop eating! So there’s still food on the plate. So what?

But what about those starving children in Africa? If you’re like me then you might have been raised to believe that you should always clear your plate because there are some people in the world who will never have enough to eat. And that’s a very good point. Which is why you’ll find a donation button to one of the numerous charitable organisations working in that part of the world in the bottom right hand corner of our website. Believe me, sending those organisations the odd donation will do you, and them, more good than forcing down food you don’t need to eat.

This blog post is based on research by Brian Wansink, James E. Painter, and Jill North and documented in their scientific paper “Bottomless Bowls: Why Visual Cues of Portion Size May Influence Intake“. You can read the paper here. Watch a short movie about this experiment here (or click the big play button in the image below if reading this post on the blog).