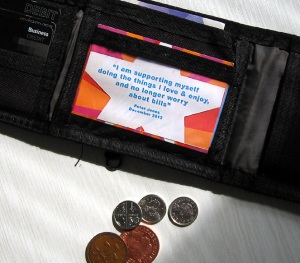 Last week I promised you a new monthly-ish feature on this blog entitled What The **** Have I Been Up To, whereby I come clean with what I’ve been spending my time on, and show you how I’ve gone about applying the concepts in the book to my own life.

Now, there will be those amongst you (mentioning no names – Simon, Amaia, Jayne…) who are no doubt expecting to see pictures of me sky diving out of aeroplanes, swimming with sharks, or bungy jumping off rock faces. I’m afraid you’re going to be disappointed. Not only are those activities reserved for the completely insane (the glider ride was as exhilarating enough, thank you very much) but even if they did appear on my Now List, for the past six months, maybe longer, the list has remained relatively untouched.

Of course, I’m still having regular (ish) Now List Days (afternoons in my case) but for the most part my Now List Day activities have been spent either researching or arranging things that haven’t happened yet. I can’t remember when I actually ticked something off.

What then have I been spending my time on, you may ask?

Allow me to give you a potted career history of Peter Jones.

Back in my early twenties, a series of poor choices and lucky accidents resulted in me becoming self-employed and working for most of the UK’s Credit Card banks as a freelance business consultant. I was (and I suppose, still am) an ideas man, and a fix-it man; wealthy men would ask me how to make even more money using the tools they had at their disposal, and I would tell them. Though it pains me to admit it, the credit crunch is partly my fault – not my idea, but I was most definitely pulling the levers and pressing the buttons that made it happen.

It wasn’t a bad way to make a living – the money was nice – but whilst I enjoyed the problem solving, and the company of the people I worked with, as the years rolled by I became less and less comfortable working in that industry. By the time I met Kate I wanted out, and much of our time together was spent trying to find ways to use the few skills we had between us to find an alternative career. We tried everything from website design, to property investment. None of those things really worked. And when she died, it felt like my dreams of escaping credit card consultancy died with her.

Of course, if you’ve read the book, you’ll recognise that as a “running away from” strategy. It’s little wonder that it didn’t work. You’ll also know that when Kate died my focus changed. Instead of trying to dig myself out of the pit I’d spent almost twenty years getting myself into, I concentrated on using my solution-finding skills to seek out the very thing that I seemed to be lacking; Happiness. Some ideas worked. Most didn’t. But I read a lot of books, made a lot of lists, and tried anything and everything I could think of.

One day a good friend of mine (hello Tina) suggested I ought to write down some of the quirkier ideas. Several months later I found that I’d accidentally written a book.

Around that time one of my banking contracts was drawing to a close, so I took the somewhat risky decision to dedicate the next few months to getting my strange work of accidental non-fiction published. If you’re a regular visitor to this blog, or my author blog, you’ll also know that not only did I achieve that but that the book has subsequently been quite successful. When I say ‘quite’, I am of course being extremely British about the whole thing. I’m using ‘quite’ in the same way that some Americans might use the world ‘wildly’. By Christmas of last year my sales were such that I’d started to wonder if I could actually get away with not returning to my previous life – whether I could achieve the impossible, fulfil a child-hood dream, and become a full-time author.

So, in January I set the following as my primary goal:

“I am supporting myself
doing the things I love & enjoy,
and no longer worry about bills.”
December 2012

Pretty soon into the new year I realised that I’d managed to set myself the most challenging goal ever. To achieve it would take some major effort on my part, and that some things might have to take a back seat. One of those things was my Now List. However, I can honestly say I think that was the correct decision. If I had to choose between a life writing books – the thing I love and enjoy – or two weeks swimming with jelly fish in Australia, I’ll pick the former every time. And besides, it’s not actually a choice. I can swim with Jelly fish next year, or the year after – but I might never have another chance, or at least this chance, to change my career.

I wish I could tell you now that I’ve done it, that my writing-related income now exceeds my outgoings. It doesn’t. Not quite. Which is why putting this blog post out there feels ever slightly foolish – almost suicidal – however I can tell you that it’s within my grasp.

In March I was one of the many authors that took part in the prestigious Essex Book Festival. A few weeks later I signed a three book deal with audible  (.co.uk | .com), the world’s largest supplier of audio books. The second edition of How To Do Everything and be Happy came out in June. The next book – How To Eat Loads and Stay Slim – is currently with my agent. And I’m half way through writing the third book. I am quite frankly stunned at what I’ve managed to achieve. Not proud – just stunned. Pride will follow shortly I’m sure, but right now I’m still reeling on a daily basis from how much you can achieve if you set your goals correctly, and put some effort in.

There are so many more things that I’m absolutely bursting to tell you, but… {big sigh} can’t. Yet. But don’t worry – I will. If only so that I’ve got something to write about next month. Ish. In the meantime lets take the focus off me – I’d love to hear about some of the goals you’ve been working on and what you’ve achieved. Use the comments box below.

Last weekend I had the chance to check another item off the Now List – I went up in a glider!

The flight lasted all of ten minutes – and believe me when I tell you, that was more than enough. Having handed me a parachute (!!) my ‘first‘ glider flight lasted about 30 seconds – the tow rope broke and we had to make an emergency landing! Five minutes later however we were back in the air, and if, like me, you imagine gliders being towed sedately into the air behind an old fashioned bi-plane, nothing could be further from the truth. They launch them using a fast moving winch (a little like a huge elastic band) and the glider rockets into the stratosphere at a million miles an hour and at 45 degree angle.

Having said that when you’re up there it’s exhilarating and truly wonderful. That smile on my face is 100% genuine. And more to the point I keep smiling each time I think about it. Want to see more? 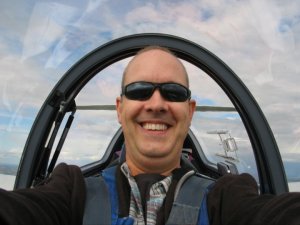