Over the last few weeks I’ve been playing catch up with some of the radio interviews I’ve given over the past few months, and back in May of this year I was invited back onto the Dave Monk show on BBC Essex, to celebrate twenty five years of the internet and to talk specifically about the surge in online dating popularity.

You can listen to the whole interview by clicking the big play button in the image below, or here if you’re reading this in an email.

We talk about my own experiences as well as some scientifically proven tips and strategies to make your own dating efforts more successful, such as…

If you want to delve into the detail the tips above, pick my brain for more nuggets of dating gems, or need a little more hand holding, then I have some very good news. How To Start Dating And Stop Waiting, my third self-help book, is available in paperback and as an ebook. An audio version – which includes the companion guide From Invisible To Irresistible – is also available at audible (co.uk and com)

You don’t need a Kindle device to read a Kindle book. Download the FREE kindle app for your computer, smart phone or tablet from amazon (.co.uk | .com)

If you like a little romance in your fiction, particularly if you’re a fan of books like Bridget Jones’s Diary, or High Fidelity, or About a Boy, then you might be interested to know that  The Good Guy’s Guide To Getting The Girl, my debut novel, is finally available!

It’s available in paperback and ebook, and it can be yours in two clicks, for less than the price of a cup of coffee – click here now.

A few days ago I met with Mark Punter of BBC Essex. We talked about my days in Credit Card Banking, the importance of figuring out what you want and list making.

To listen to the interview click the play button in the box below, or (if you’re reading this in an email) click here to play clip on YouTube.

Want to hear more? Click here to listen to an interview I gave to broadcasting legend Matthew Bannister 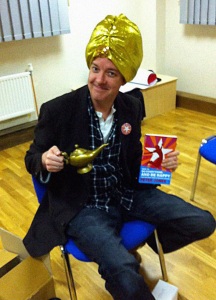 If you’ve read How To Do Everything and Be Happy (and may I take this opportunity to say thanks for doing so, and I sincerely hope you found it useful) you’ll know that much of the book concentrates on getting you to make a Wish List. Put simply, a list of things you want in your life, or want your life to be like.

Making a Wish Lists is very important. It’s how I kick off the whole second half of the How To Do Everything and Be Happy workshop, and when pushed by Dave Monk (from BBC Essex) I said that ‘figuring out what you want’ was the one thing that you could do right now, that would have the biggest, most positive impact on your life.

I know. If ever there was a moment when I started to sound a little too evangelical – some might say ‘scary’ – that was it.

But humour me for a second. Take a break from whatever you were supposed to be doing and think instead about what you want, right this second.

Knowing what you want in any given moment is, I’ve discovered, a hugely underrated skill.

If, like me, you live and die by your to-do list you find yourself adding more items than you’re checking off. By mid-afternoon you’ve done nothing but answer the phone and talk to people. Your desk is a sea of post-it notes. You can no longer see the top of your inbox. You’re drowning.

Or perhaps you’re having a day that’s the total opposite. The phone isn’t ringing. There aren’t any emails. There are only two items on your to-do list. Neither of them are very inspiring. You feel like your brain’s made of porridge.

Both these situations can be fixed by asking yourself one simple question:

WHAT DO YOU WANT?
RIGHT NOW?

Your initial answer, of course, will probably be something like “I want it to stop” – either the chaos, or the boredom – but you need to dig a little deeper than that. Try and get to the bottom of what would make a difference, either at that moment, or in the near future.

For instance, on your chaotic day simply knowing what it is you most want allows you to prioritise all the stuff coming ‘in’. If the stuff relates to whatever it is you want, prioritise it; if it doesn’t, chuck it on the backburner. Pretty soon you’re like a ninja: sword-wielding bad guys might be coming at you from every angle, but you’re only paying attention to those that present you with an opportunity.

On those ‘boring’ days, however, you can take your thinking about what you want to a whole new level. You can write things down. You can make lists. You can toss ideas about. You’re like a ninja in training – mentally preparing yourself. It’ll only be a matter of time before you realise one of the ideas you’re toying with is something you can do, right now, on this boring day.

Next time you find yourself drowning in work, or plodding along with no real purpose, stop, and ask yourself what it is that you want. 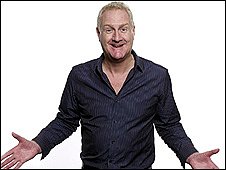 Yesterday I had the opportunity to meet with Dave Monk, from BBC Essex, to chat about How To Do Everything And Be Happy.

We discuss whether it’s actually possible to do everything and be happy, the three causes of unhappiness, the secret to happiness, and what one thing you can do, today, to feel happier.